Dealing with the Naysayers and Path Dictators 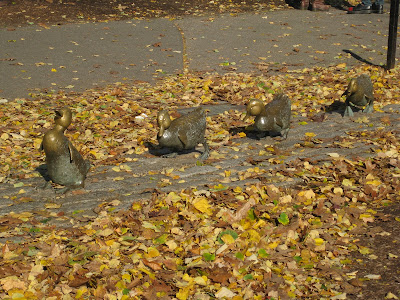 When I was 26, I decided I wanted to take a trip to Ireland. I'd never been to Europe before—had only traveled to the east coast of the U.S. twice—but I knew I wanted to see more of the world and decided that Southern Ireland would be the perfect place to start. (This was mostly based on an avid love of U2 music.) I talked a girlfriend into going with me and when I told my parents we were planning a trip, my dad looked at me and said, "You can't go to Ireland!"

I should have prefaced this story by saying that my family, although extremely well-meaning, isn't comprised of a bunch of adventurous world travelers. They love to vacation, but up until very recently they've stuck primarily to the western United States.

The thought of the youngest member going across the pond to a Foreign(!) Country(!) was just too much.

Had I said, "Okay dad—you're right it's dangerous," I'm sure I would have been rewarded with praise and affirmation. But I knew my path was meant to be different from theirs.

This was not the last time a member of my family tried to dissuade me from doing something I felt personally compelled to do.

The people around us have opinions about pretty much every move we make, don't they?

But no matter how well they know us, they don't know us like we know ourselves. They will never be able to interpret what feels authentically right to us the way we can. They cannot sense our intuition in their bellies.

It's hard to tune out their quacking sometimes. It's hard not to be obedient and follow the same paths our friends and family members have chosen. The difficulty is compounded by the fact that sometimes we have to hear again and again and again why we Really Should Be Doing THIS Instead.

What I've learned though, is that the risk of not obeying the Path Dictators and Naysayers is miniscule compared to the risk of not following our instincts. Doing what feels true and right to you—in your deepest knowing parts—will always yield a reward. And the people who really care about you will continue to be there after you set out on your divergent road. They may still squawk about it, but the ones who love you won't walk away.

And when they see how satisfied you end up from following your own heart instead of listening to their direction, the wags of their fingers will turn to pats on your back.

Posted by Melissa Maris at 6:02 PM