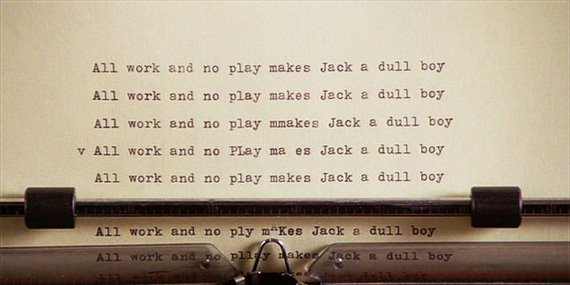 I was cruising through the channel guide on my TV today when I cam upon The Shining—a movie that both terrified and captivated me when I first saw it at 15. I couldn't help but tune in for a bit this afternoon and watch as Jack spiraled into madness.

Sure, he was one of Stephen King's greatest psychopaths. But can't we all relate to the feeling of mental unbalance that ensues when life feels like work, work, work all the time?

Without time for play, even the best of us can go a little crazy.

And really, when we're our best selves, isn't it because most things feels like play? Like when we're on vacation and everything from a swim in the ocean to the taste of some new, exotic dish has a hint of mischief behind it. That sort of silly, thrilled feeling you'd get when you were a kid.

According to an article featured on PsychCentral.com, "Play is just as pivotal for adults as it is for kids."

Being in a playful state of mind and engaging in play-spirited activities sparks joy, creativity, and learning.

Approaching tasks, relationships, and problems playfully can make them much more enjoyable—and even yield better results than if you tried to tackle them from an all-business mindset.

Life coach extraordinaire Martha Beck has been talking about the need to play for years. She recommends giving yourself permission to embark on an ongoing cycle of rest-until-you-want-to-play, followed by play-until-you-want-to-rest.

I've found that letting myself slip into a slightly goofy place during office hours can make projects feel more like play. Singing and dancing while cleaning or cooking definitely elevate the level of fun associated with each. Even just playing with my cats helps put me into that "pivotal" place of lightness and amusement.

The bottom line is that everything feels better when come at it from place of play rather than work.

Then, like a joyful toddler, I can let myself relax until I'm ready to take on the next round of play.

So tell me—what have you been doing lately that feels like play? Or how can you bring more play into your day-to-day routine?
Posted by Melissa Maris at 8:17 PM