Who's Got Your Goat? 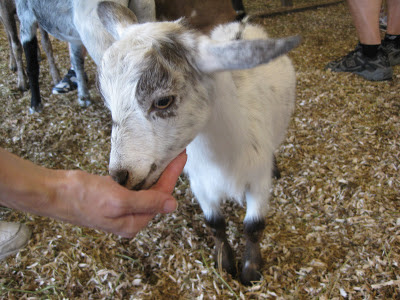 Last week I was driving to the grocery store when I found myself replaying a story in my head that I've been reciting for the past two years.

People in Hollywood should be better drivers.

My blood pressure rises every time I think about it. If they would just learn to go faster or slower and not block intersections or cut people off, life in the city would be so much easier. The problem is that my getting all fired up about it does nothing to the other drivers. It doesn't make them more conscientious. It doesn't magically remove a chunk of them from the road to decrease traffic and make left turns simpler. All it does is get my seat belt in a wad...

So as I cruised down Franklin Avenue last Thursday, I caught myself in the story spin cycle and tried to turn it around. Rather than focusing on how other people should be different, I tried to identify how I could take responsibility for my frustrated state.

I should be a better driver.

Almost immediately, I felt more relaxed. Finding my role in the situation was empowering. It meant that not everything was out of my control.

I quickly sought evidence to support my new story. I should be a better driver: I should focus on being calm when I drive. I should worry about what I am or am not doing—even if it's in response to someone else—instead of concerning myself with what other people are doing. And, I'm not a perfect driver all the time, so I really shouldn't judge others.

When someone or something has got your goat, the one who suffers most is you. And one of the best ways to end the suffering is to turn it around and identify your part in the equation. Would things be different if you spoke up to the person and expressed your feelings? Would it help diminish the resentment? Could it be that they were somehow tapping a sore spot in you that really didn't have anything to do with them? Or maybe it was a matter of you taking a particular action—interacting in the same way you always did—and expecting a different end result?

If the well is dry, there comes a point when you just have to move on and look for water elsewhere.

I'm going to remind myself of this as soon as I get into my car again during Hollywood rush-hour traffic. For me to expect it to be anything different than it has proven to be during the last two years is just silly. All I can do is turn it around and look for ways I can be better in the situation. I can release my goat, remember to breathe, and hope I stumble upon a good Bee Gees song on the radio. And I know beyond a doubt, that will make the ride much more enjoyable.
Posted by Melissa Maris at 11:27 PM