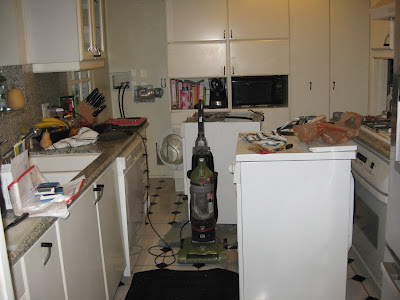 In the past several weeks, our house has felt a bit like a refurbishing facility and a junkyard combo. While we've been tearing apart our backyard under the guise of re-landscaping, things in our house have been spontaneously falling apart. This isn't the first time this has happened. It seems that our home and the objects inside it have a tendency to fall into cycles of unrest...

Since sometime in June, my Mr. Wonderful has had to repair a sprinkler line that broke and became clogged, our dishwasher that decided to stop heating the water and drying the dishes, and our washing machine which sounded like someone dropped a boulder inside it during its spin cycle last week. The sprinklers and dishwasher have made full recoveries, but we had to invest in a new washer.

I teased Mr. W that the washing machine was his fault because last week he said he hated doing laundry. Hello, Negative Manifestation.

But today I started thinking that maybe our appliances need to be on the ever-growing list of things we're grateful for in our lives. It's easy to give thanks for health and happiness and family—or even silly specifics like the new red top I bought on sale or the orchid a friend recently gave me.

But perhaps we need to make concerted efforts to look around ALL the time and really be thankful for EVERYTHING.

I finally finished The Joy Diet today and in the final chapter, Martha Beck shares this old Sufi story:


Two men encounter each other walking on a country road. One of them, a wealthy nobleman, has a bag slung over his shoulder and a dejected expression on his face. The second man, a beggar, asks him why he's so depressed. "I'm looking for happiness," says the nobleman. "I've tried everything—I've had wealth, power, position, education, lots of women, but I'm still totally angst-ridden. So the other day I finally threw some stuff in a bag and set out to find myself."

"Ah," says the beggar. "I see." Then, without warning, he grabs the nobleman's bag and rushes off into the forest. He cuts through the rugged terrain until he's some distance ahead of his distraught victim. Then, when he sees the nobleman coming, he leaves the bag in the center of the road and hides behind a rock to watch.

Naturally, when the rich man sees his bag, complete with everything he was carrying when he lost it, he goes crazy with joy—jumping around, singing hallelujah. The beggar, still hiding behind his rock yells, "Strange, what it takes for some people to find happiness."

As the old 80's hairband Cinderella song went: You don't know what you got 'til it's gone.

Lightly petting everything in my home and whispering to it that I'm grateful may not only work to make me more joyful and appreciative, but will hopefully generate some positive juju that will keep all electronics and other apparatuses fully functioning. I'm definitely going to give it a try

Gratitude comes in many forms, doesn't it?!
Posted by Melissa Maris at 7:00 PM