Putting Pen to Paper and Praying for Rain 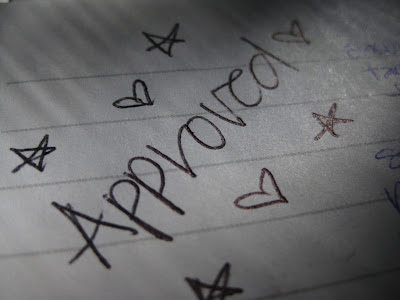 I read about a really fantastic idea on Martha Beck's blog last week for creating a manifesting journal. Apparently the idea was passed to her by Master Life Coach Bridgette Boudreau who learned it from Master Coach and Manifesting Guru Jeanette Maw. It's called a Pray Rain journal and you're supposed to write in it every day as though you're already living the life you want to live. As though you've already met the guy, gotten the job, moved to the new city, attained the goal.

Fundamental manifesting: Acting as though.

I've done some exercises like this before—but never kept a dedicated journal for it. And although I've recently written "stories" about my dream life on a mini vineyard in Santa Ynez, I've yet to find out whether that life will come to fruition.

But I do know that writing down dreams and desires does something to the Universe.

For example, the Mr. Wonderful list I made eventually spun itself into a husband that matched it. And the countries I've journaled about wanting to visit have gotten ticked off one by one. I even had a rather magical experience when I wrote the word "Approved" on a piece of paper while I was waiting to find out if Mr. W and I had gotten our health insurance policy this year.

I was worried because I'd been denied (thanks a lot, osteopenia) back in 2005, and thought that black cloud might follow me all the way into 2012. But as I sat with the phone to my ear, listening to the hold muzak, I focused hard on the word "Approved" and how full of love and relief I would feel when I got that news.

I acted as though it was already happening.

And when the insurance rep got on the phone, she told me exactly what I wanted to hear.

I'm going to give this whole Pray Rain journal a shot. If the pen is powerful enough to bring me a husband and health coverage, a vineyard and a lucrative life coaching career can't be too far off—right?
Posted by Melissa Maris at 10:48 PM