What to Do When Your Lizard Starts Climbing the Walls 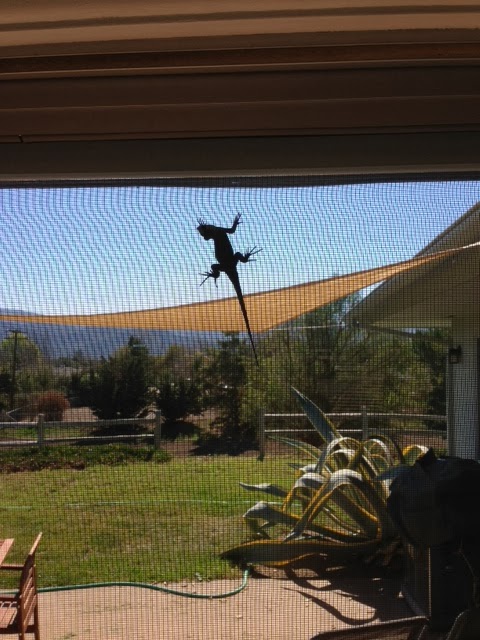 I was sitting at my dining room table last week when I looked up and saw a shadowy visitor making his way up my screen door. One of the backyard's many lizards had decided to take a vertical stroll. I wondered if he was panicking like our inner lizards do when they start climbing the walls.

What's an "inner lizard," you ask?

There's a part of our brain called the amygdala, which governs the stress response and puts us into fight or flight—even over silly things like the mere possibility that we *might* have to speak up in an important meeting or our mother-in-laws *might* show up at our houses unannounced. You know, nothing major like the possibility that a tiger *might* eat us.

Because the less evolved part of our brains is often referred to as the "reptilian brain," my mentor Martha Beck dubbed that panicky amygdala brain voice "The Lizard." It's the voice that pops into your head and shrieks declarations like:

It's the part of our noggins that goes all ballistic about stuff that hasn't even—and may not ever—happen. Yet that little lizard voice can send us into adrenaline overload before we even get out of bed in the morning.

So what to do when your lizard starts climbing the walls?

Second, take some deep breaths. Breathing helps calm the crazed stress response that the lizard triggers. I'm a big fan of doing alternate nostril breathing with my eyes closed. Pulls me out of stress response every time.

Third, treat it like it's your pet. Imagine patting your lizard on the head and telling it to simmer down. Thank it for trying to protect you from woolly mammoths and fashion faux pas, but tell it you're going to go ahead and do what you want even though it is trying to scare the bejeezus out of you. Let your higher self extinguish its freak out.

Fourth, remember it is the less evolved part of yourself and that's not the part that will guide you toward your best life. The calm inner voice that speaks in cool tones and gut feelings is the one you should listen to. Your lizard may protect you from imaginary threats, but it can also be the thing that stands smack in the way of your ultimate success.
Posted by Melissa Maris at 6:10 PM