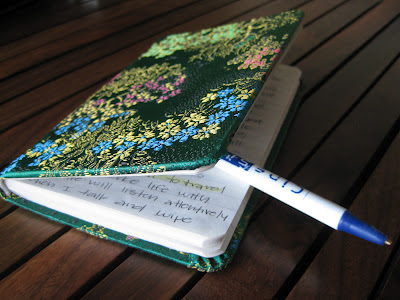 My biggest concern at 28 was finding a boyfriend so I could fall wildly in love and get married. My parents had gotten married at 18 and 21. My older siblings were both married. My close cousin was married. Many of my friends were getting married. I felt like it was my time to join the ranks of the wedded.

Looking back, I can see that my priorities were askew (the marrying part may have been carrying more weight than the actual lifelong partner part) but that's a topic for another post.

In addition to giving me a copy of the book Excuse Me, Your Life Is Waiting, my spiritually-attuned boss encouraged me to make a list of the things I was seeking in a man.

We've all made that list before, haven't we? If I dug around, I could probably find a draft of it that I compiled in 6th grade.

The difference with this list was that I had some relationship experience to inform it. In fact, I was still nursing some heartache over a guy I'd met on Christmas Eve the year before and I'd be lying if I said I didn't include a lot of his traits on my revised List. He was perfect on paper, or maybe he fit my paper perfectly. It's sort of a chicken vs. egg conundrum on who came first—him or those traits I adored.

Sadly, the relationship was lacking a crucial element, which hindsight showed me was ingrained in my own underdeveloped self-esteem and overall unhappiness (mostly with my job).

I wrote one. And then another one a few months later. And then a friend loaned me some Tony Robbins CDs to listen to and I went through a larger exercise of identifying my dream mate and my worst-nightmare mate. By the time all was said and done, I had a superbly detailed Mr. Wonderful List that still rings true today.

That List was the beginning architecture I used to build the life—and love—I wanted to have. As I dated different guys over the years that followed, I could always go back to it to remind myself who I was really looking for.

In a way, that List held me accountable. Without it, I don't know if I would've found my husband three years later.
Posted by Melissa Maris at 2:57 PM