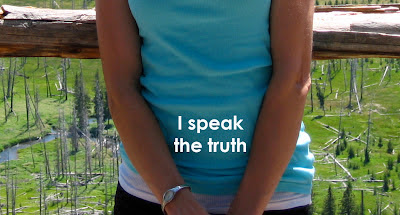 I met Mr. Redflags at a point in my online dating journey when I was desperate to spend time with someone who was outgoing and self-assured. I may have even said, "I just want someone confident," before we had our first date. Darn that "just" word. I already knew what could happen when I used it the wrong way...

At the close of our second date, Mr. Redflags launched into a big speech about how I was the girl he'd been waiting for his entire life and that he wanted me to take down my online profile and date him exclusively. It was only our SECOND DATE. And it wasn't like we'd been having a big 'ole email love affair for months leading up to that.

My gut told me something was fishy. Either he was trying to get me in bed or he was a relationship addict who didn't really care about getting to know who I was at all—he just needed a warm body to fill the role of girlfriend. Maybe it was both.

But my hopeful head said, "Well, maybe this is the way it's supposed to be. Maybe this is right." So I ignored the pit in my stomach and agreed to make a go of things.

A couple weeks later, the gut again went into overdrive. After holding my hands across the table at a sushi restaurant and telling me he promised to give me a life of adventure if I stayed with him forever, Mr. Redflags disappeared. At least for a night.

I thought it was strange to not hear from him, given our exclusivity talk and his vow to give me an action-packed life. My stomach felt twitchy.

The next day when he explained that he'd been out to dinner "tying up some loose ends with a girl he'd been sort of dating before me," my gut punched my kidney and yelled GET OUT!

But I ignored it.

I ignored it over and over again. For fourteen months. Through highly suspect behavior. Through my own feelings of wavering attraction. Through fight after fight. A move in and a move out. A half-hearted confession I didn't recognize as such at the time.

And then, in July 2007, I found out that Mr. Redflags had cheated on me with his (married) ex-girlfriend from college and there was a baby and a potential paternity test mixed into the equation.

The night I hacked into his email and discovered the news was not my proudest moment. But it was the justification I'd been needing for over a year.

My trusty tummy had been right all along.

Intuition doesn't lie. It doesn't have an ulterior motive. It is a manifestation of our most genuine instincts. A gift.

Mr. Redflags' and my relationship officially ended a few days later after I'd processed what I had seen and told him I knew everything.

From that moment on, I promised my gut I'd never again discount its warnings. And it has never once let me down.
Posted by Melissa Maris at 4:42 PM