July – September 2007: Climbing out of the Pits 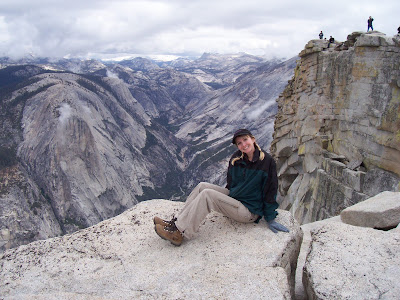 After breaking up with the cheating Mr. Redflags, I made a vow to never again rush in, settle, ignore my intuition, or let myself feel diminished in a relationship. Even though I could recognize our affair for the mess it was, I still struggled in the months after we parted. I felt raw and betrayed and knew that I needed to take back control over my happiness.

So I made plans to climb a mountain with friends.

Something incredibly transformative took place inside me as I trained for our 17-mile hike up Half Dome in Yosemite. It was as though the strength developing in my body spread right to my recuperating heart and sense of self. Everything began feeling surer and more agile.

A couple weeks before our trip up the mountain, I signed up again for online dating and agreed to be set up with someone who worked at my company. Even though Mr. Redflags had hurt me tremendously, I didn't feel scared to get back into the swing of dating. I took full responsibility for how things had turned out with him and I knew my intuition would help me prevent that from ever happening again.

Accepting responsibility for your part in a situation is really empowering. It means you have a choice about whether you'll allow something like it to take place again. It means you're not a victim.

The best part of this time was that I finally felt like I knew 100% what I deserved and had this amazing sense of certainty that I was going to get it.

It was like my worst relationship experience had given me the awareness I needed to find my best one. I was feeling choosier than ever—but thanks to my Wonderful List, collage, decoded dating patterns and defined deal-breakers, I was totally clear on whom I was seeking. I felt confident I would be able to distinguish right-fit from wrong-fit in terms of the men I met.

About a week before I climbed Half Dome, the man who would become my husband contacted me online. It took me 15 days to write him back. I was going slow with the guy I'd met at work, had been chatting with another nice guy online and wasn't sure I wanted to complicate things with a third prospect. But after I wrote him back and he replied, I was pretty instantly intrigued.

My gut had a good feeling, but I kept my pace cautionary.

Mr. Wonderful-to-be wrote me an email just about every day. We talked about Half Dome and a big hike he'd done in Canada a few years prior. We traded stories about family and  music and our favorite HGTV shows. He told me he had a trip to Italy planned with a friend and would like to take me out when he returned.

I think we talked on the phone only once before he left for his two-week vacation. I was so excited when he came home because it meant we finally would get to meet face-to-face. It had been five whole weeks since I first responded to his email.